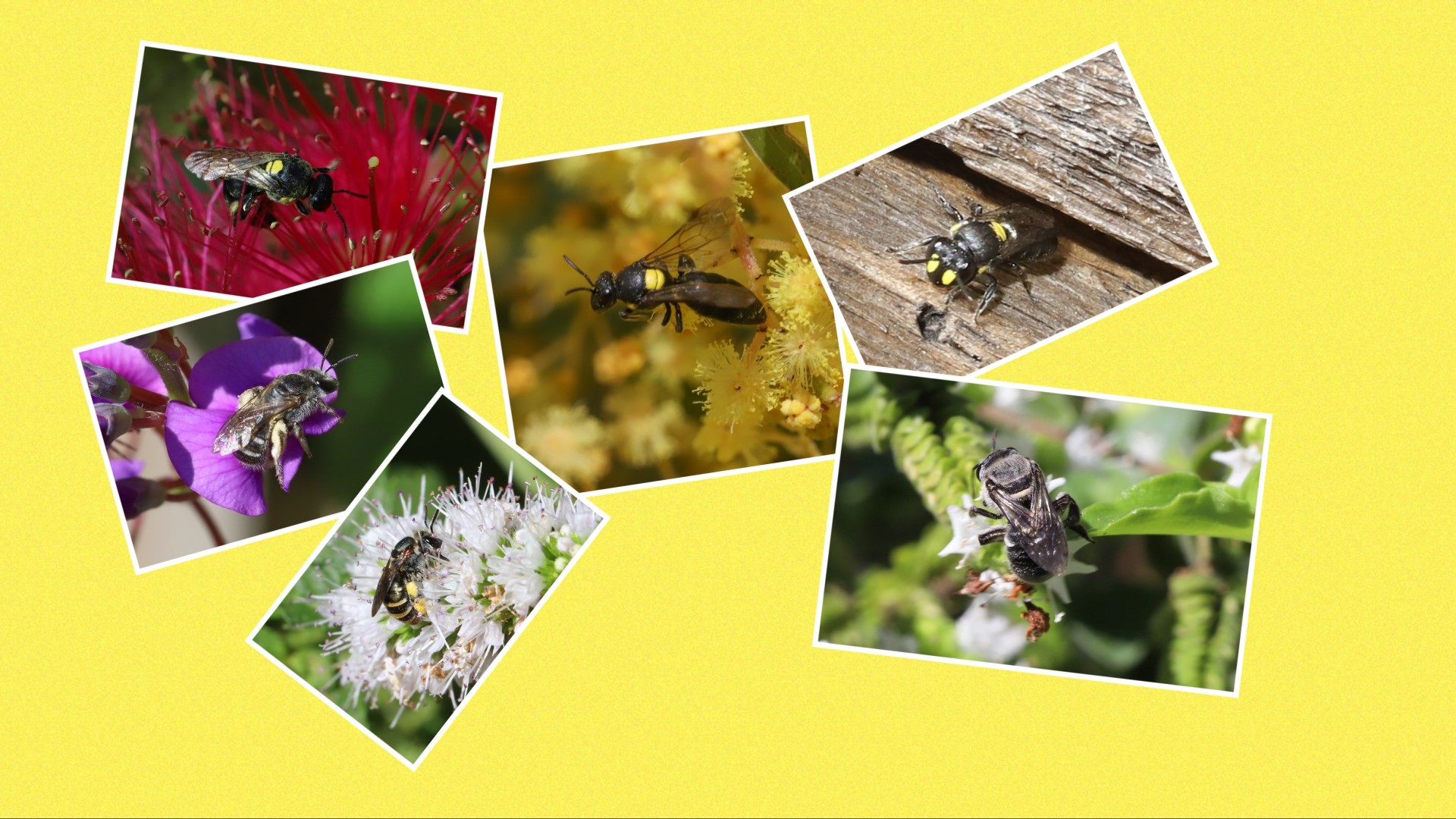 I’ve been putting this moment off, but it had to come. I approach this series of Bug-a-log creatures with greater trepidation than any group yet. Why? Because it seems the world is abuzz with information and opinions on the fate and observation of bees. It seems some have chosen bees as the ‘canary in the coal mine’ – an indicator for fate of the human race. Their role of pollinators and honey-producers make them useful to us and therefore a focus of our attention and love. They are the koalas of the mammal world, the whales of the marine world. There are websites, facebook pages, books, magazine articles dedicated to native and non-native bees. In a sense there is almost too much information out there on bees and many who are far more expert can identify and discuss bee behaviours better than I. On some occasions I get frustrated at this narrow focus of the media – there are many other species who are pollinators and there are many bees who don’t produce honey. But then, I spot a blue-banded bee (Amegilla sp) with its gorgeous fluffy tubbiness , knowing green eyes and happy buzzing and I get it. Bees are captivating. And if they are a gateway for people to take an interest in insect ecosystems then that’s a big positive.

At the beginning of 2020 fires raged, not far from me, all along the NSW South Coast. My heart filled with grief at the loss of wildlife habitat and the millions of creature big and small who perished. If our environments are to ever recover then there’ll have to be a stock of small creatures – to move in to decompose, pollinate, provide prey, spread seed and a myriad of other roles. Bee media (the good ones) encourage people to plant native, be wary of pesticides, and provide bee hotels ( I prefer to call them insect hotels). Those measures help, not just bees, but many creatures – directly or indirectly. So if native bees are a brand ambassador for our insect ecosystem then I hope they do a great job.

My worry is that I don’t think I have much to add to the vast amount of material out there and worse still I may miss the mark on some of the id’s. (Please let me know if you think so). Because, despite the amount of information available on bees, they can be hard to identify to species without forensic examination (and going down many internet rabbit holes). This is why I only identify most to genus. Bees more than any other creature remind me that the purpose of my Backyard Bug-a-log is not to be a scientific paper, it’s just a small photographic record of the insects and spiders that exist in my Northern Illawarra backyard over this particular period of time. I don’t often use common names with bees, not because I am being deliberately intellectual but because many of them simply don’t have common names and if they do they are can cause more confusion because of their non-specificity.

The group of six native bees in, Part 1, fit into the broad classification of the short-tongued bees. Bee tongues (glossa) may be visible on macro photographs but this feature is often not useful to the casual observer. However it is a useful scientific division and helps divide my backyard bees into two almost even groups (by number). Next month I will post the long-tongued bees – which are generally more well-known.

I want to acknowledge some of the bee sites and people that have fascinated and educated me ; the clever community on – Bees in the burbs and Bee aware of your native bees facebook groups and individually Kit Prendergast and Ken Walker, both entomologists with vast knowledge of native bees. Also I have used the guide book , A Guide to Native Bees of Australia: Terry Houston, extensively and Michael Batley’s excellent websites on Sydney Bee identification; https://michaelbatley.github.io/Bee-ID-SH/main.htm