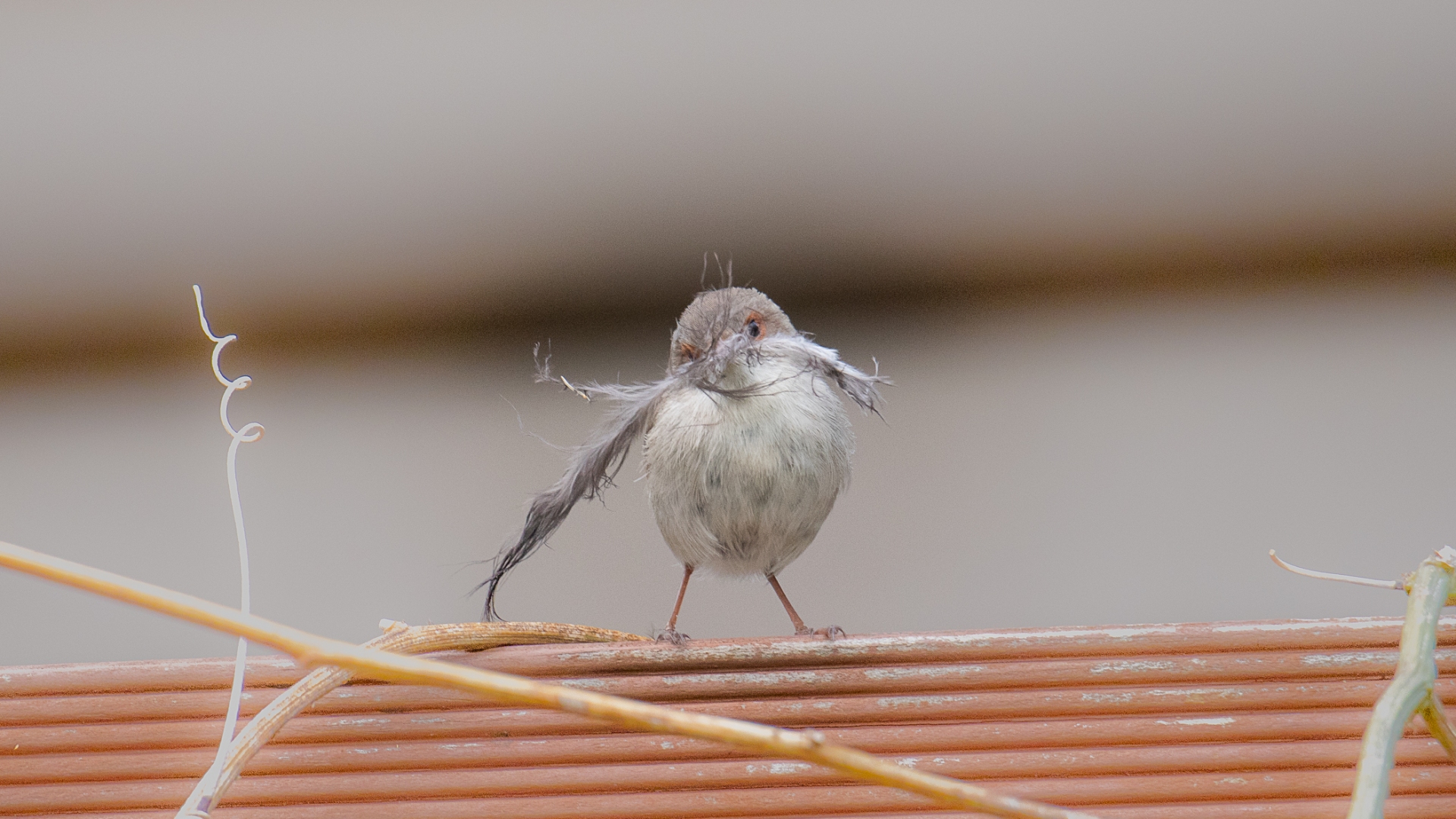 Quite a while ago I wrote a post about my backyard banksia (prostrate form)  It’s messy sprawling tangle  (much like my writing) that delights me every morning as I look out my kitchen window. I never imagined it would provide me with more joy by providing a shelter for a fairy-wren nest. Of course I didn’t know in late winter that our backyard would  be home to a wren brood. But looking back on my photos I see a timeline of events.

Late Winter – Where are the males?

The wren family are happily hopping around the backyard on the grass. But where are the bright blue boys? There seems to be just females. Well the answer is – the males are probably there incognito, or at least with only hints of their later plumage. The male fairy-wren generally doesn’t get it’s full bright plumage until breeding season. He will moult his blue feathers to become brown again around autumn. Although the timing and extent of this change can vary greatly from individual bird and different years. It is thought older males (greater than 4 years) may not change back to brown colouring at all. Communities of fairy-wrens consist of a breeding pair and young males who haven’t found their own territory. Mum will generally kick her daughters out of the home territory earlier, when they pose a threat to her dominance.

Like a fairy-wren fairy-tale Ralph dons his best blue suit in time for the spring ball. The blue plumage seems to make Ralph human-shy he is very hard to photograph but the girls and, perhaps immature males, are quite bold and hop close as I sit on the lawn step. It is thought that the male’s blue and black plumage, while impressive, comes at a cost of exposure to a  predators ( See: It isn’t easy being blue – the cost of colour in fairy wrens)

Rita and Ralph begin courting with lots of long hops in the sunlight, closeness and cuddling. (okay I know it is unscientific to anthropomorphise, but the habits of children’s fiction writing are not easily quelled). In truth the fairy-wrens live out a story closer to a sordid soap opera than a fairy-tale. In all probability Rita is flitting around the neighbourhood to hook up with other handsome blue boys and no doubt Ralph is not confining his attention to Rita. Ralph may try to woo the girls he desires by presenting them with a yellow petal (unfortunately I didn’t photograph this activity) Around three-quarters of eggs laid by a female superb wrens have been found to be fertilised by males other than the male in the home territory. Rita and Ralph will likely stick with each other for life but will continue their sexual promiscuity every breeding season.

Rita and Ralph seem very interested in the vegetable garden and the banksia. This is closer to the house than they normally venture and I have a good view from the kitchen window of their activities. I begin to get a little excited when I photograph the feather in the Rita’s beak.

Nest building is definitely underway but I’m still not sure where. Rita will build and incubate the eggs all by herself but Dad (or perhaps step-dad from genetic viewpoint) will come in handy later

While I’m now suspicious that the nest is amongst the tangle of bendy banksia branches Rita seems to enter  the plant in different spots so I don’t know exactly where it is. I don’t want to look for fear of scaring them off.

Once Rita has completed the nest she will lay the fertilized eggs one at a time (around 24hrs in between each). When all the eggs are laid she will incubate for around 14 days.

Feeding the hungry chicks (and an anxious wait)

There is a flurry of activity. The wrens come back and forward all day with meals for the newly hatched chicks.   I can’t honestly tell how many females/juveniles are involved in the feeding as I don’t see them at the same time but it seems as one leaves another arrives. Ralph definitely does his fair share of food gathering while Rita or other females often sit on the garden stake calling. Is it a protective warning aimed at predators (or me) or is it a call of, ‘Hurry up with that food’? The delivery wrens bring tasty treats of spiders, crickets, grubs and moths.

The twittering from the nest becomes louder each day especially when food is nearby. It is funny to hear the desperate chirping (gimme gimme) then the choked chirping (gobble gobble) as the food goes down the throat. I may have imagined it, but the chirping was particularly raucous when a juicy grub was in the offing.

As followers of any of my social media would know I have a dog I call, the Bored-doodle (bordoodle breed). She spends most of her time in the backyard and regularly chases skinks (unsuccessfully) and once a rat in amongst the banksia. I’m so scared she’ll destroy the nest or attack the chicks. I put loose trellis frames around the most accessible parts of the bush but realistically I can’t make it dog-proof. As soon I was sure there are chicks in the banksia I start saying, ‘NO’ whenever the Bored-doodle went near. Via a facebook message from the Fairy-wren Project I learnt it was around 14 days from hatching to flight. I count the days anxiously.

One day without thinking I walk down to have breakfast at my usual spot at the end of the path. A twittering flurry of tiny things rises up from the banksia. I should have been more careful.  It seems I’ve made the fledglings panic and fly sooner than they were ready.

It’s mayhem. One chick flies into the thyme flowerpot near the house, two flutter into the vegetable garden and one hits the glass fence and comes down on the wooden sleeper around the pool area . There are four! Four fluffy tiny birds with short tails who can barely fly.  Rita and Ralph flap around trying to gather them in. I stand still and yell at the Bored-doodle who is approaching the fallen chick. The dog freezes responding to the urgency in my tone. The little chick flutters up to join his dad on the fence.

Relieved, I call the dog and creep back to the house, grab my camera and take a few shots, then let them settle. Later that day I hear them chirping in the citrus tree. ( I have a telephoto  lens and these picture are cropped so am not as close as I may appear. I was wary of frightening them again so don’t try and brush back the vegetation in the way.

Every morning I listen for the fledglings chirps. I don’t  hear them every day and sometimes I think they’ve abandoned the yard for good. But anytime I hear their demanding chirps  I call to anybody who’s listening, “My babies are back!  I spy them hiding in the foliage of trees and shrubs but occasionally they’ll come out into the open – eager to greet their food-bearing parents. The chicks grow quickly – especially their tails.  Within two weeks of fledging their appearance is barely distinguishable from their mother but they are still cheeping insistently for food. I learn that chicks rely on their parents for food for around 40 days.

December 10th : It’s a month as I am writing this, since I’ve seen any of the family so I hope they’re alright. On reflection I think it both wonderful and sad that they chose my backyard to nest. Why would they choose a yard with a dog? Was it a calculated risk? The bored-doodle definitely keeps cats away. We frequently see cats roaming in the front yard and the nearby bush. So maybe the bored-doodle was the lesser of two evils. And as it turned out (luckily) she was well behaved around them.

I finally feel it is okay to look for the nest. I took a picture of the back of the nest but can’t get round to the front without pulling it out. There are feathers (some appear to be the male blue feathers) and yellow flowers interwoven in the nest of grass and web. There even appears to be a silk coccoon in the mix. Wren families can have two broods per season but they don’t use the same nest. However they may use materials from the old nest in the new – this is why I leave the nest in-situ in case my wren family decide to recycle building materials.

If you don’t own hunting pets and you have the space it’s worthwhile considering growing thick low sturdy shrubs to shelter and, if you are lucky,  provide a nesting site for small birds. Having witnessed the volume of food including grubs that were consumed by the wren chicks I can say that the wrens were great pest controllers for our vegetable garden as well a been a Superb delight to observe.

Big thanks to the Fairy-Wren Project for answering my questions on Fairy-wren breeding .

4 Replies to “The Superb Family”