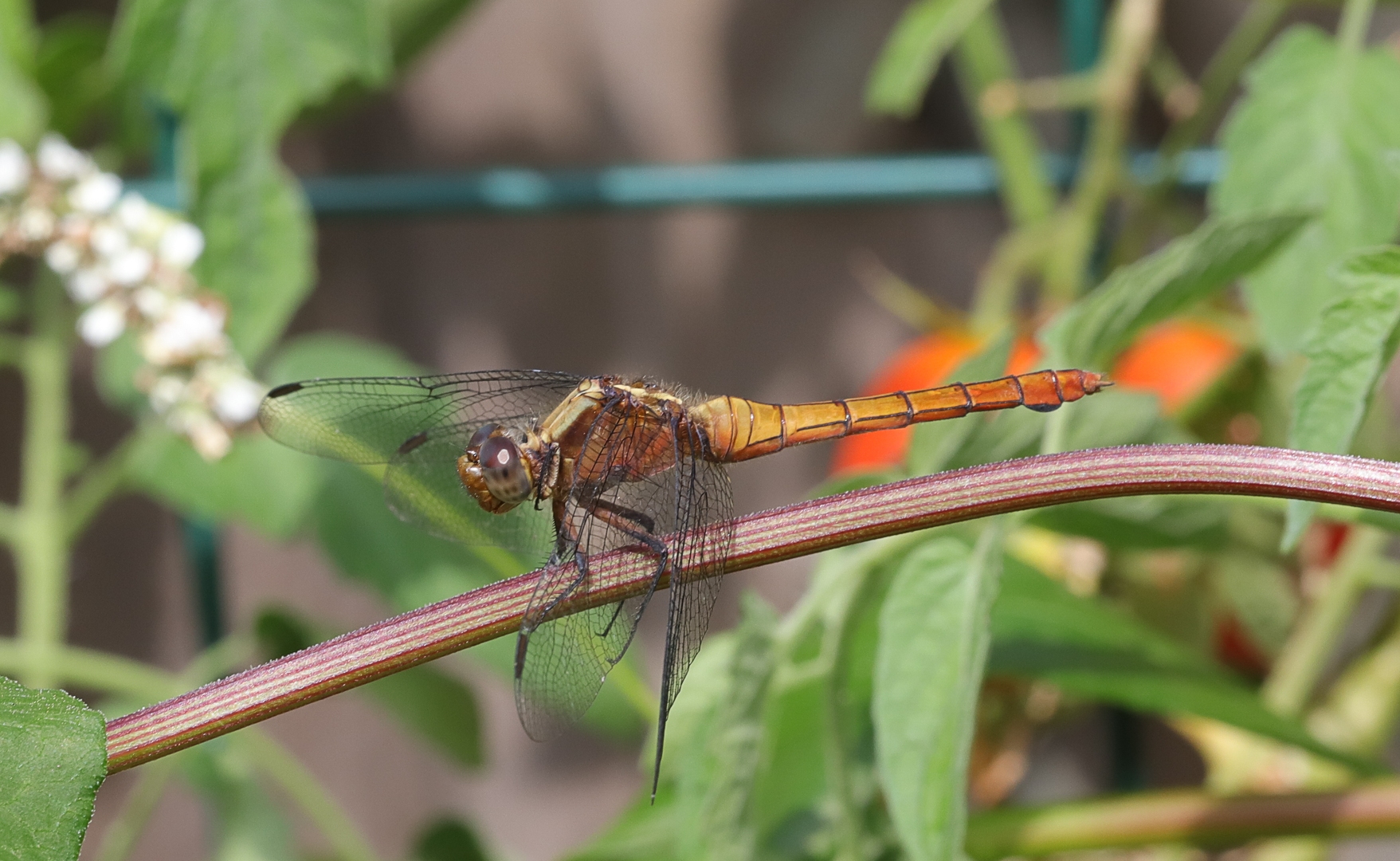 When and Where in yard : Only seen the once perched about a metre off the ground on the Finger Lime tree.

Observations: The dragonfly sat on the thorny branch of the lime tree tipping its head towards me as if trying to get a better view. The beautiful aqua-coloured eyes are its most striking feature – hence the ‘Jade’ in the common name. I didn’t identify the species immediately – the identification of many dragonflies requires close inspection of patterns. Jade Hunters are of medium length but have thin abdomens (almost like damselflies) that widen near the tail. The yellow-greeny-striped pattern on the front of thorax and abdomen is very defined. It wasn’t a damsel fly because of its thick thorax and lay-flat wings. Although, the tail markings discussed in Fun Facts require close study, from the above features the casual observer can make a reasonable guess that it belongs to the GOMPHIDAE family commonly called Clubtails. So called because of the club-shaped abdomen (in most species). Australian dragonflies in this family include the word ‘Hunter’ or ‘Vicetail’ in their common name. The photos I have seen on the web of Jade Hunters are mostly resting on the rocky ground so my photos not really typical.

Fun Facts: If you’re a macro photographer (or have particularly good eyesight) then there are some clues that will help you distinguish Jade Hunters from other clubtails. The Yellow-Striped Hunter is the closest in pattern to the Jade Hunter. The presence of a short/incomplete dorsal stripe on the 8th and 9th abdominal segment of the Jade (circled) differs from the complete stripe that runs all the way along top of the abdomen on the Yellow-striped. Note that it is easiest to count back from the last segment (where last/tail segment in dragonflies is the tenth). The thorax pattern is also a little different unfortunately I didn’t get a head-on shot (next time hopefully) but you can just make out a pale green stripe perpendicular to the horizontal collar marks – In the Jade Hunter you can see these two stripes don’t join (arrow) whereas in the Yellow-striped Hunter they do.

I know when I started this Bug-a-log project I said I wouldn’t be getting in to counting stripes (or maybe I said wing veins) but truth is the whole species identification by patterns is really addictive. When you solve an identity puzzle it feels like cracking a secret code. Luckily there are those who came before me who have already cracked the code and and my task is to apply their observations. There be Dragonflies was a particularly good website in my research. I haven’t as yet photographed a female Jade Hunter but they do have slightly thicker abdomens than the slender male.

When and Where in yard: Interestingly the six occasions I photographed Australian Emeralds five were in Autumn (three in 2018/19 the other two in previous year). In 2019/20 one was observed in late spring. All were clinging onto a variety of plants, usually with their tails pointing toward the ground. The most common time of day to observe the resting Australian Emerald was around midday ie from 11am to 2pm.

Fun Facts: The Australian Emerald is very similar to the Tau Emerald dragonfly. I have never observed a Tau in my coastal Wollongong backyard so maybe they’re not as common here. The differences between the Tau and Australian Emerald are:

When and Where in yard: The Fiery Skimmer both male and female were mainly observed on high dead perches (ie sticks, stakes, dead stalks). They were observed during mid-summer to early autumn period (ie January to March). Most commonly observed at rest in the late afternoon ie from 3 – 4pm.

Observations: The Fiery Skimmer (around 45 mm long) is the largest dragonfly (longest and thickest) I photographed. However as I said in the introductory blog post I regularly see what I think is an Australian Emperor which is larger again (around 75 mm long) but I haven’t been able to capture on camera as always flying, circling over the lawn. Fiery Skimmers are sexually dimorphic – that is the mature male and female dragonflies look different. The mature male has a bright red abdomen. It’s thorax is dark brown and eyes dark grey. The mature female is orange/brown in colour with light grey/purple eyes.

Fun Facts: A slightly less flattering common name for the Fiery Skimmer is the Bog Skimmer. This refers to the fact that this dragonfly is not very discerning when comes to watery breeding grounds – the female may lay eggs in bogs, drains, cloudy ponds and brackish waters. It is therefore, quite well adapted to the urban environment (like my backyard and surrounds) Immature males (sorry no photo) can look similar to females in colour but the abdomen is more constricted at abdominal segment 4 (remember last tail segment is tenth) Also closer inspection will reveal the anal appendages – two very short and straight appendages in female while male has third clasping appendage under upper two.

Even though it is quite easy to identify the Fiery Skimmer in the Illawarra. I made the mistake of quickly identifying a dragonfly I photographed in the Kimberleys. When I returned I posted on the inaturalist site. It was eventually identified as a female Rosy Skimmer (Orthetrum migratum) which is only found in more northerly regions of Australia . The difference are subtle – the dorsal stripe is thinner and extends up to the thorax and there is no constriction of the abdomen. This demonstrates how important it is to take into account location when identifying insects. I have included my photo of the Rosy Skimmer (breaking my rule of only using photos from backyard).

When and Where in yard: Only seen the once resting on grass in March 2019 (Early Autumn)

When and Where in yard: The medium-sized Scarlet Percher was observed on only few occasions in the summer months. The male was observed twice and both times it perched on a hard surface (ie rock and cement). The female was also observed twice, once perched on a garden stake and the other time on the ground, clinging to a dead leaf.

Observations : If you want to encourage perching dragonflies and get clear shots, a stake that rises above your garden bed is a good idea. The best photos of Fiery Skimmers and female Scarlet Perchers were on the plastic and wooden garden stakes in our vegetable beds. Presumably these are good lookouts to spot prey and to display yourself to potential mates. However both sightings of the male Scarlet Perchers were in the late afternoon on either cement or rocks. The male perchers seemed to be enjoying the summer day’s heat retained by the hard surfaces.

Fun Facts: Both Wandering and Scarlet Perchers lay their eggs directly into shallow water. The female dips her abdomen into the water while flying in tandem – clasped around the neck by her mate. In this way the male protects the female during egg-laying and guards from any other would be suitors.

One Reply to “Dragonflies and Damselflies”